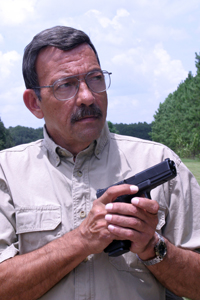 A high intensity, four-day, 40-hour immersion course in rules of engagement for armed law-abiding private citizens, emphasizing legal issues, tactical issues, and aftermath management. Classroom topics will include interacting with suspects, witnesses, responding police officers, threat recognition and mind-set, management of social and psychological aftermath after having had to use lethal force in defense of self or others and preparing beforehand for legal repercussions and minimizing exposure to them. Situations in the home, at the place of business, or "on the street" will all be covered.

On the range, livefire instruction is based upon Ayoob's StressFire handgunning techniques. After interviewing hundreds of officers who had survived gunfights, Ayoob drew on their experiences, combined with his own extensive research to create a powerful combat handgun system, initially known as the StressFire shooting method. Ayoob's research showed that in life threatening situations, human beings experience profound physical and psychological pressures causing deterioration of fine motor skills, and altering perceptions of time and other sensory inputs. Combining proven shooting techniques with principles from various martial arts styles, StressFire is a system that not only works under the enormous stress of violent encounters but actually feeds off it.

These techniques are designed to bring out the student's maximum potential for shooting a handgun under stress and to achieve the optimum blend of speed and accuracy. Students will learn drawing from concealment, two-handed shooting stances, one-handed shooting with either hand, shooting from positions that work from behind cover, speed reloading and more with overall emphasis on fast, accurate shot placement. Training includes completion of a police-style qualification. This instruction is ideal for the shooter who wishes to hone and fine-tune their techniques. This is not a program for beginners or those new to the handgun; we recommend completion of our Level 2: Defensive Handgun class or equivalent from another reputable firearms training school prior to attending.

Prerequisite: Concealed Pistol License or LE Credentials. This class is suitable for shooters of all levels.

About the instructor:
For nearly three decades, the Firearms Academy of Seattle, Inc. has hosted Massad Ayoob in the Pacific Northwest, making his exceptional training courses accessible to area residents. Ayoob's qualifications to teach this material is unparalleled--